I seldom share bytes on Etc. Guy but was intrigued when I heard from a New Jersey writer who stumbled upon my 2013 story “Daughter’s Dating is Dad’s Dilemma.” I wrote “Daughter’s Dating” when Kate, 16 at the time, entered the dating game.  Now 20 and in college Kate’s still sorting out the dating game.  Thanks to Sally Perkins, a writer for BackPacker Verse, who suggests that memorable dates can be on a hike?  – Eric

“Obviously, if I was serious about having a relationship with someone long-term, the last people I would introduce him to would be my family” – Chelsea Handler, American Comedienne

Contributed by freelance writer Sally Perkins.  It’s not every day I hear from Andrew, my eldest, but when I do I know it’s going to involve something daring or adventurous. I get the phone call early Monday morning and an exuberant Andrew rattles on about his Latvian girlfriend. He was bringing her home and the first thing he wanted us to do together was go for a hike. Okay, not quite together. We were tasked to go ahead and prepare the setting because he wanted to make things more permanent between him and Krista… He wanted to propose. I can’t remember the last time I camped but it included mud and rain and dirt. That was about eighteen years ago.

The Trek To the Shops 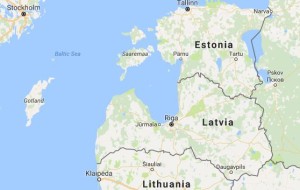 My enthusiastic and harried husband, Mark, dragged me from one outfitter store to the next. I went to keep an eye on the credit card balance and frowned every now and then as he loaded up shopping carts. My saving grace was that I could remind him that everything he bought needed to be carried up a mountain—but there were only two of us and our delicate princess teenage daughter, Meg. This meant he had to do the heavy lifting. Meg envisioned romantic hikes in the wilderness while my visions were of backache and mudslides. To me, there is nothing romantic about sleeping outside. Even in a tent.

The Trek Up the Mountain 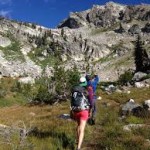 The trek took far longer than merely a short hike up a beginner trail. The trail to our campsite was short enough, but lugging all the gear took three trips up and down craggy rocks and muddy patches. It couldn’t have been more than a mile, but I felt like I ran the Boston Marathon barefoot. Luckily, Mark made the three trips while I soothed my souvenirs, a fair share of blisters. Meg and I enjoyed the time of our lives preparing a cozy campsite, fairy lights included. Before long we cordoned off an area that had a beautiful view, a perfect location to pop-the-question. Mark lazed in the hammock, his eyes closed, trying to convince Meg and me that he was merely thinking. 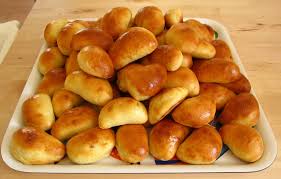 Just after noon Andrew and Krista made their way up the trail.  We all instantly fell in love with her. She was warm, friendly, and brought us homemade Speķa pīrāgi. Can anyone say bacon pies? Yes please! It was only natural that Mark would drop down on one knee and propose. I laughed and lightly slapped his shoulder.  Krista politely declined. No.  After dinner though Andrew whisked her off and proposed.

It was a glorious outcome and well worth earning blisters. Even now, two years later, I would journey again up a mountain to see those two united. I say this as I munch on bacon pies and listen to them discuss the name for their expectant baby. Krista deftly deflects names that won’t work in Latvia and with only a month to go, I’m sure they’ll pick one out of a hat. And no, it’s not just for the pies.

Have a question for Sally?  Leave a comment and she’ll get back to you.